This is the first in a series I’ll be doing about open jam nights in Fairfield and New Haven counties. We’ve been having a wonderful time attending them and look forward to trying out the few we still have to attend.

The Horseshoe Tavern  is a Southport landmark. They hold an open jam every Monday night. The first thing we noticed was that energy in the bar is great and the patrons seem to genuinely be having fun. The crowd is certainly older, mostly 50’s and 60’s and there isn’t much diversity in the music being played. But if it’s straight ahead classic rock and roll you are looking for in a very welcoming setting, this is a really fun jam to attend. It had a lot of really good musicians and the crowd was dancing and laughing and having an all around great time. The crowd and other musicians seemed to be very welcoming and inclusive,  but if you are young and if your style of music is anything but classic rock, this jam may not be your best bet.
The Acoustic, Bridgeport, CT
This is by far my favorite of the open jam venues we’ve attended so far. Nestled in the heart of Black Rock, among a treasure trove of great little bars and restaurants, The Acoustic is a hidden gem. The open jams are held on Tuesday Nights and from what I’ve witnessed, the diversity in genres and age ranges is the most impressive I’ve seen. Bands sign up and get about 10 minutes to showcase their talent. Occasionally, a band will be featured and they will get a 30 minute set. And talent is in no short supply. We watched musicians ranging in age from 20’s- 60’s playing pop, funk, rock and everything in between. This place is a music lovers paradise and features some of the most talented artists that come through the Connecticut area. There is no grandstanding, no nepotism and no narcissism. You won’t be subjected to the same 10 classic rock songs, sung by the same exact people week after week. Instead, you’ll be treated to a variety of music by those artists that understand that originality of expression is everything. The Acoustic really seems to understand this. And while I still have a few open jams to attend, it so far greatly surpasses all of the many other venues we have attended. This is the place to go if you are a real and true fan of music of all genre’s and are looking for something new and different. 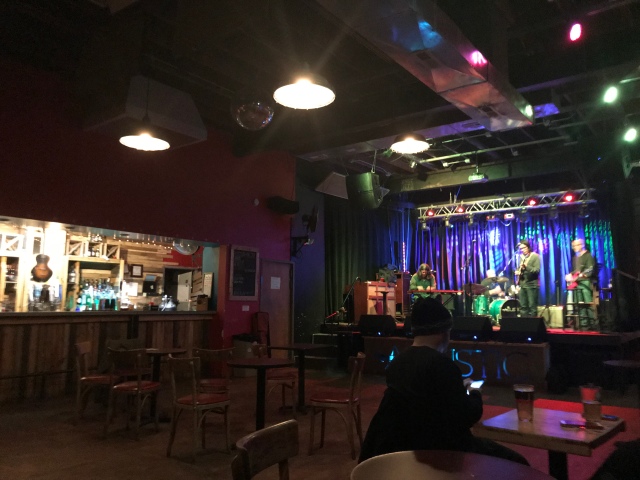