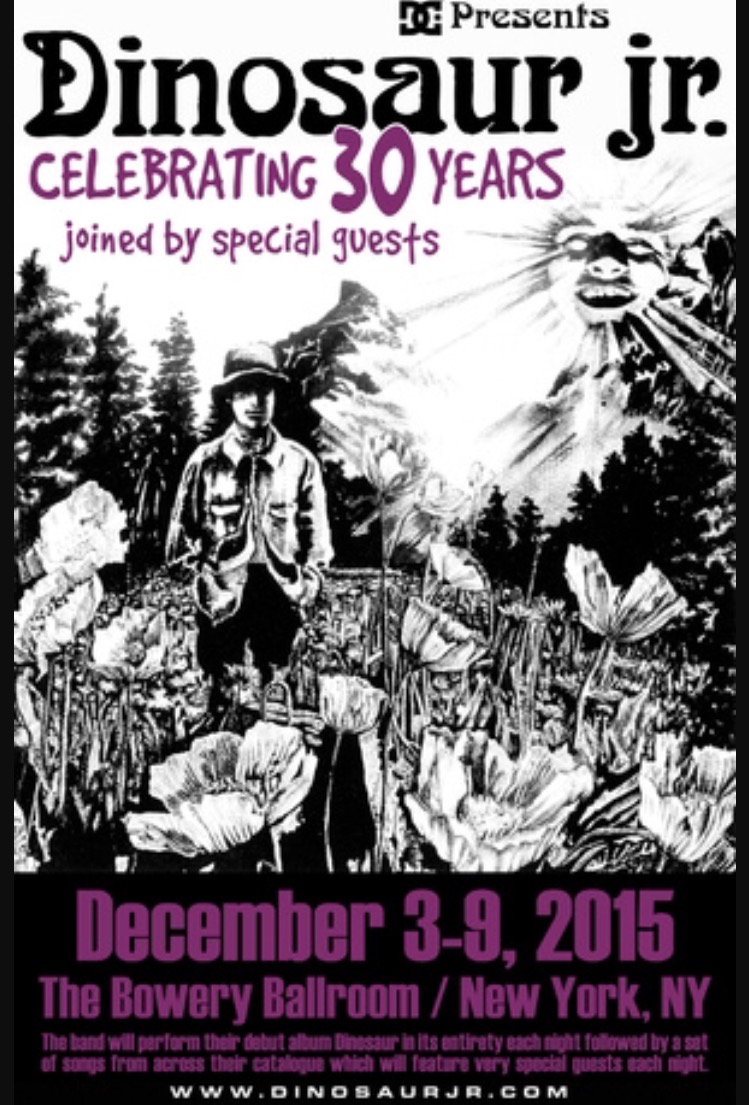 Dinosaur Jr. has always been one of my very favorite bands. Their unique sound, quirkiness and lyrics were all something that made this band special. They are also famous for crushing it live. My life was kind of a mess in the fall of 2015, and I remembered my promise to myself; go to more live shows. So when I heard about this tour, which was in honor of the 30 year anniversary of the release of their first album, “Dinosaur”, I knew without doubt that I would be going.

I have a strong dislike for going to shows with people just willing to tag along without really caring about the music. Fortunately for me, I have a few musical soulmates. This is particularly true of a friend who despite being 11 years my junior, is always on the same wave length as I am musically. I got her a ticket for her birthday and counted the days.

While my plan had been to get the show very early and get right up next to the stage (an extremely brave thing to do, considering the outrageously loud volume of a Dinosaur Jr. show!), meeting friends for dinner meant arriving later and having to stand towards the back of the room. All was, good, though. I was at a show with people I cared about and trusted, getting ready to hear one of the best live bands in the world.

Everything started pretty quickly after our arrival. Henry Rollins announced the band from way up high in a balcony overlooking the theatre. While it was great to see Henry, it wasn’t exactly a surprise, given that he follows the band as they tour quite frequently. We knew that some pretty cool musicians had been showing up to play with the band on this tour, but we kept our expectations low. All that really mattered was that we were seeing Dinosaur Jr.

The first set was the album “Dinosaur” in its entirety. And when the first blaringly loud notes of “Forget the Swan” began to play, I knew this night would be something special. It may have been the 3 glasses of wine I’d consumed, But I was at a show with people I cared about listening to one of the best bands in the world. Something happened when I was dancing with my friend and belting out the lyrics to “Repulsion”. I was happy. But it was more than that. I began to feel like me again for the first time in a very, very long time.

The second set started with “Bulbs of Passion”. This was followed by Sonic Youth’s Lee Ranaldo joining the band for a very good rendition of “Little Fury Things”. Matt Valentine from the band MV+EE  made a guest appearance during the song “Start Choppin’”. The only disappointment of the evening came when Pussy Galore’s Julia Cafritz came out to sing “Budge”. It may be just my opinion, but her screeching rendition of this classic song did it no justice.

We had already witnessed a handful of musicians join the band, and truthfully, after “Budge” I kind of hoped that the rest of the night might be just Dinosaur Jr. playing alone. But suddenly, the volume in the room went way up. And the people around me cheered. And it took me a few minutes to even comprehend what I was seeing up there on that stage. But then I heard the first chord to my favorite Dinosaur Jr. song of all time. And my eyes we not deceiving me. There on that stage stood Bob Mould. My musical hero. He had a smile from ear to ear and was belting out the chords to Freak Scene harder than anybody who is 55 years old could ever be expected to do. I knew that I had to get up to that stage. Suddenly, my friend grabbed my hand and somehow, miraculously parted the sea of people and there we were, up against the stage watching Bob Mould play “Freak Scene” with Dinosaur Jr. When the song was over, J. Mascis switched to drums and the band played an outrageously good version of Husker Du’s “In a Free Land.”  After this song, my friend headed back into the crowd to join our other friends. Maybe it was my screaming and obvious joy at seeing Bob Mould up there, but as I started to walk away one of the sound guys grabbed my arm and yelled “Don’t go, Bob is coming back for the encore”. So I stayed.

The final song of the evening was a version of Neil Young’s “Cortez the Killer”. On stage were Dinosaur Jr., Lee Ranaldo, Fred Armisen and Bob Mould. The night could not have ended any better. I don’t think I stopped smiling for a week.

December 6, 2015. That was the night I woke up. And became myself again. Thanks Dinosaur Jr. and Bob Mould. It’s all because of you.