I keep reading reviews for Bob Mould’s latest album, “Sunshine Rock “ and except for a very small percentage of them, I’ve come to the conclusion that either they’re all missing something or that I am.
Most reviewers are touting this album as Bob finally bringing his music out of the darkness and into the light.
To me, even though this album certainly contains some more upbeat tracks, there is still the requisite darkness, albeit a more mellow and more self reflective gloom. Bob battling himself and his demons.
But why is it that the vast majority of the reviews of this latest record are praising the new and improved “happy” Bob? While it’s a fact this this album is nowhere near all happiness and light, what kind of message are we sending when we make it sound like happiness and light are BETTER? Were so many fans actually disappointed when Bob put out albums that were mostly dark? Were they less comfortable with those records that an album that was more balanced or light? And to that I’d like to ask why?
I’m no songwriter, but I imagine that just like with any other form of writing, it is an extremely cathartic process. Letting the darkness out so there is room to let the light in. An artist that can connect with his or her emotions is one that can connect with their audience. In a world full of pop garbage, to listen to an artist that can feel what I feel is an incredible experience.
Sure, it’s nice to see Bob smile. Sure,  I hope he’s genuinely happy. But in the decades I’ve loved him, he’s smiled and laughed and created great music and lived his life. As with any human being there were highs and lows, I imagine. But maybe, just maybe, in writing songs like “Black Sheets of Rain” and “The War” Bob was cleansing himself of pain in a way he best saw fit. Through his art.
I also beg to differ when it comes to the idea Bob’s music has always been all dark. As a matter of fact, I’ve always seen the hope in Bob’s lyrics. The idea that even in darkest times, there was always something to believe in and hold on to. You hear the duality of his battles in songs such as “Hold On” from Patch The Sky and most certainly on my favorite track on this latest album, “Lost Faith”.
A lifelong Mould fan, I have turned to his music at every stage of my life. His darkness has often mirrored mine, especially when my own life was difficult or filled with loss or pain. Bob is a master at making you feel. A deeply retrospective and empathic man who sees into souls.
On this album, we hear darkness, we hear joy and we hear everything in between. Bob continues to be a master, and this album contains everything from the incredible “I Fought”, which is reminiscent of his Husker Du and Sugar days, to the upbeat “Sunshine Rock” to an incredible cover of “Send Me A Postcard”. His music continues to get better with age, as do his live shows. When we saw him in Brooklyn in February I was blown away by just how amazing he continues to be. A night filled with decades of his best music, played just as loud as you’d ever want or imagine, and the witnessing of humility and grace that this artist possesses when it comes to being grateful that his audience is still so in awe after three decades.
The darkness is not something people should rejoice in him “overcoming”. We all have moments of pain and despair and emptiness. It’s been a comfort to me throughout my life to turn to Bob’s music when I most needed someone to understand how I felt.
If happiness and joy are something that you’ve been longing for in the music of this man, I’d say you have missed the entire point. 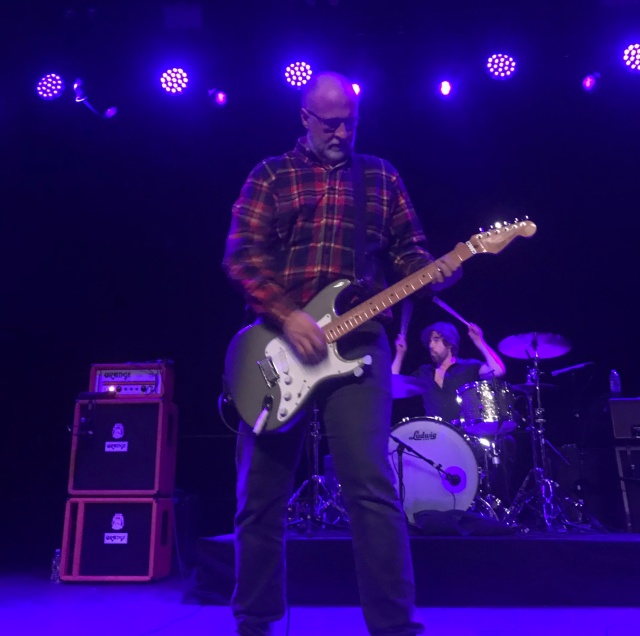